According to long time vampire aficionado, Tony-Paul de Vissage, Savannah, Georgia is now the capital of Vampire-land. Join the diverse characters in this witty story, one filled with eroticism, humor, pathos and flavored with the deep South. This is a story of one vamp's attempt to right a wrong committed six centuries ago.

Do not miss this one. It's a blast.

Out of 5 stars, The Last Vampire Standing earns a 5.

Posted by Wild Women Authors at 5:32 AM 5 comments:

A Murder of Principle, by Susan Coryell

A Murder of Principle, by author Susan Coryell, a March 2018 release out of Wild Rose Press.


For fans of cozy contemporary mysteries, A Murder of Principle is the book for you. Caution: once you pick it up, you'll be hard pressed to put it down.
After Principal Wendy Storme dies, few at Harding High--students, faculty, staff and parents-- lament her loss. As told in cleverly plotted flashback by author Susan Coryell, the story shows the evolution of Principal Storme's escalating reign of terror. By the time the witch finally breathes her last, it almost comes as a relief. Naturally the list of suspects ranges from the above-mentioned students and abused faculty members and staff to parents and a few fellow administrators.
Without giving anything away, many had reason to kill Wendy Storme. A Murder of Principle shows the secrets and machinations which are apparently common to any school system. It was great fun to discover a different side of an educational system.
Out of 5 stars, A Murder of Principle earns a 6.

The Cowboy's Embrace by Kara O'Neal


Our Review:
. . . . At age eleven Lily Spero lost her parents and younger siblings in an attack perpetrated by a gang of masked riders. The only thing that saved her was fourteen year-old Deacon Tolbert. Days later Lily was rescued by a kind family who raised her as their own. Watching from afar, and realizing he would never be able to provide for her as these folks could and would, Deacon faded from Lily's life.
. . . . . Neither forgot the other and sixteen years later, on a ranch outside Houston Texas the two meet again. Love blossoms then blooms. Unfortunately, the man who directed the annihilation of Lily's family learns of her existence and conspires to do away with the only witnesses to the carnage, Lily and Deacon.
. . . . . The Cowboy's Embrace explores racial intolerance, love, redemption and acceptance. It is a story of love and joy and acceptance. If other stories in the Pike's Run series is anything like The Cowboy's Embrace, this is a series for serious historical romance lovers.

Out of 5 stars, this earns a 5
Kat Henry Doran, Wild Women Reviews

Tempting The Light by Bonnie Gill

. . . . Bad luck magnet Abby Fitzpatrick gets fired, catches her boyfriend cheating with a mime, and is cursed by an evil genie who pops out of a tampon box. She's bound and determined to remove the spell and, as fate would have it, the hottest guy she's ever met is out to kill her.

. . . . River Stone, a Cryptid hunter for Legends and Myths Police Squad (L.A.M.P.S) poses as sheriff for Abby's hometown of Haber Cove, New Jersey. He's out to find and capture a man-eating gnome and bag the legendary Jersey Devil monster. Little does he realize, the woman who catches his heart is the same creature that he was sent to destroy.

Our Caution: This hoot of a story keeps you turning the pages long after you should stop for the night and pick it up in the morning. Trust us, you won't be able to put this one down.

Our Review: In a matter of hours, smart-mouthed, take-no-crap-from-anyone Abby Fitzgerald loses her job, finds her boyfriend in bed with a mime, then gets hit with her period. Enough? Sorry, the trauma just keeps on coming when an ugly genie bursts out of a box of tampons and puts a curse on her. No joke. Enter a to-die-for hunk in the form of the local sheriff named River Stone whose job, unfortunately, is to trap a Gnome terrorizing the community and kill the notorious Jersey Devil. Care to guess what the genie's curse entails? You got it: Abby turns into the Devil on the first day of her period.

And . . . you won't find out until the very last page if these two end up in a happily ever after ending. Another no joke. Read it. It's worth it.
Out of 5 stars, this earns a 6

Love Is Silent, a historical romance by Icy Snow Blackstone, a 2016 release by Class Act Books.


Anna Leighton, fluent in educating the deaf and hard of hearing, takes a position as teacher to twenty year-old David Woods, the 27th Baron Mayfield. She is given six months to teach him to communicate effectively in order to make his way in British society or be declared incompetent, losing both his title and the inheritance to a greedy, ne'er do well cousin.
While Anna is a young but talented teacher, she's never taken on an adult student and her work is cut out for her--especially after David balks at the thought of returning to the classroom. She doesn't put up with his tantrums and sparks fly--on both sides. Together, the two teach other several important life lessons and manage to forge a future.
The love story is sweet, sensual and filled with wry humor. The characters are layered and compelling in their goals, motivation and conflict. Beyond those important qualities in any work of fiction, the detailed research by author Blackstone is impressive. Love Is Silent comes with an added bonus of teaching the reader about the history of education of the hearing impaired. We applaud Ms. Blackstone for her extraordinary effort.
Out of 5 stars, this earns a _6.


Posted by Wild Women Authors at 4:03 PM No comments:

For Love of Hawthorne by Diana Rubino

Salem, Massachusetts witnessed horrific and shameful events in 1692 that haunted the town for three centuries. Accused as witches, nineteen innocent people were hanged and one was pressed to death. Judge John Hathorne and Reverend Nicholas Noyes handed down the sentences. One victim, Sarah Good, cursed them from the hanging tree: “If you take away my life, God will give you blood to drink!” She then set her eyes on Judge Hathorne. “I curse you and your acknowledged heirs for all time on this wicked earth!”

In 1717, Nicholas Noyes choked on his own blood and died. Every generation after the judge continued to lose Hathorne land and money, prompting the rumor of a family curse. By the time his great great grandson Nathaniel was born, they faced poverty. Ashamed of his ancestor, Nathaniel added the ‘w’ to his last name. His novels and stories explore his beliefs and fears of sin and evil, and he based many of his characters on overbearing Puritan rulers such as Judge Hathorne. 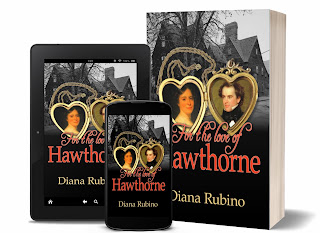 Our review:
This is a touching love story between two people, one of whom would eventually reach world wide acclaim for, among other works of fiction, The House of the Seven Gables. Told in journal style, in the voice of Sophia Peabody Hawthorne, this story tells of a life long romance between two people whose love was thwarted at every turn by manipulative family members who, for selfish reasons, did not want to see the romance blossom. Against intense negativism and manipulation, it survived, because of strength and perseverance ion on the part of Sophia. So many times, Nathaniel erected barriers; each time Sophia knocked them down and moved forward, determined to help the love of a lifetime.
If you are a fan of historical based fiction, particularly early 17th Century Massachusetts, appreciate detailed research which is cleverly woven into the prose, For The Love of Hawthorne is the book for you.
We are better for having read it. Congratulations Ms. Rubino on an incredible feat.

Shot Through the Heart

A Matter of Pride

Home In Your Arms

Rescued by a Highlander

Steadfast Will I Be

A Course of Action

To Heal a Heart

Stranger in the Storm

A Midwife for Sweetwater

From Here to Fourteenth Street

Always on my Mind

Night of the Owl

A Pride of Brothers: Rick

Waiting for a Miracle

Getting Things off With a Blast

A Song for Another Day

The Love Left Behind

The Texas Ranger and the Professor

Love, Art, and Other Obstacles

A Different Kind of Fire

One Scoop or Two series

One Scoop or Two series

For The Love of You

Forever In A Moment

Don't Tell Me I'd Be Prettier If I Smiled